Nominations are due for the 2018 awards to honor those throughout the year who distinguished themselves in a manner deserving of outward ridicule.  The list of our nominees is extensive but not complete.

We’re looking for additional nominees in the categories listed, but would love to learn of other categories that highlight the uniqueness that was 2018.  All participants will win some form of Confederacy of Drones swag delivered to their mailbox in discrete packaging.  The quality of the swag will be dependent on the quality of the input.  It will range from a small rock with Confederacy of Drones hand lettered to something even nicer.

Submit your nominations and suggested award categories to confederacyofdrones@gmail.com.

Without further delay, here are the 2018 award categories and our (incomplete) list of nominees.

Relationships simplified, there’s an app for that 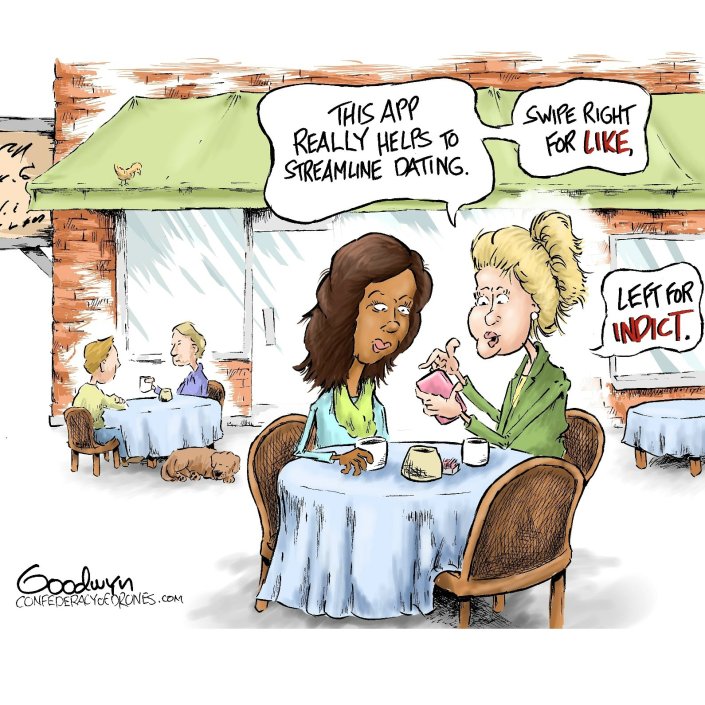 The Washington Post, never one to shy away from blaming Trump whenever possible, may have jumped the shark this week.  Their editorial board has declared Trump complicit in hurricane Florence.  Obama was more complicit in be-headings than Trump could possibly be in a hurricane.

If the Post is looking for other equally preposterous things for which Trump is deserving of blame, we offer the line-up below.  Well, the Omarosa thing, yea, that one’s squarely at his feet.

Our illustration above was too funny not to make a full cartoon out of it. 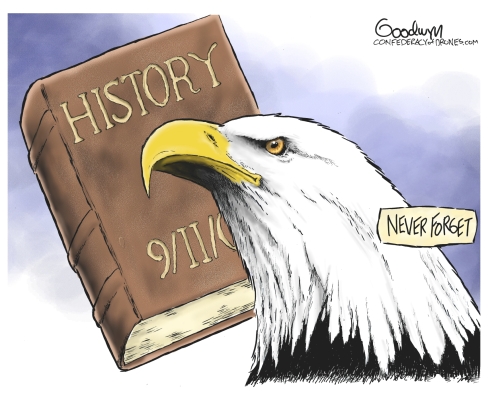 Iconic images ain’t what they used to be 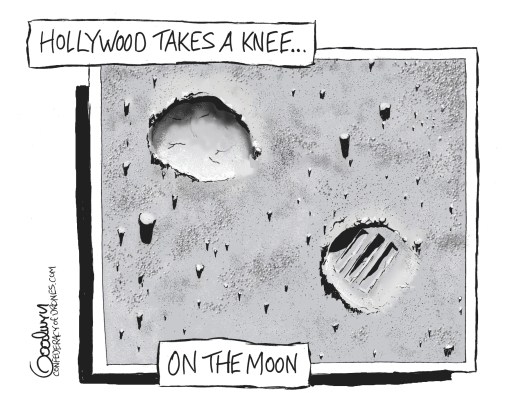 Hollywood has removed the iconic image of the American flag being planted on the moon in the upcoming movie First Man.   At some point, you’d think it’d be more about entertainment than political messaging.  For many, instead of seeing the movie they’ll be taking a knee.

So for those in the make-believe movie producing business who want to send a message along with playing dress-up, we have a few other iconic scenes you can consider omitting when you get around to portraying certain events on the big screen.

–  The life of a certain bus driver… without Rosa Parks.
–  Iwo Jima raising… without the flag pole.
–  Nixon resignation… without him getting on the helo.
–  Sacagawea biopic… without Lewis and Clark.
–  Iran hostages released… without Reagan.
–  John Madden biopic… without a turducken.
–  Famous balconies in Memphis… without MLK aides pointing across the parking lot.
–  Barrack Obama’s presidency… without his muscle (Michelle).
–  Reagan’s presidency… without the Berlin Wall.
–  McCain’s funeral… without an ending.
–  Invention of the telephone… without Watson.
–  Invention if the internet… without Al Gore.

Whatever you do, don’t use the “M” word 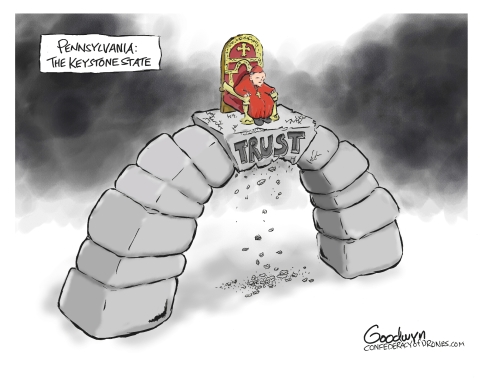 Run to the border

In light of this past weekend’s level of violence…

A recent poll noted that by 2043 non-whites would be in the majority in the U.S. and asked “Is that mostly good or mostly bad?” No “doesn’t matter” choice.  You have to pick good or bad.  Half of Republicans surveyed said “mostly bad.” Step outside and you can probably hear the screams that Republicans are racists.

But! Ask any racial group what they’d think if they were in either the majority or the minority (and given no other choices) many would say mostly good if they’re in the majority, mostly bad otherwise.

So we’d like to conduct our own poll.  Only one question, have you stopped beating your wife with a puppy while committing on-line fraud against St. Teresa’s Academy for the Homeless and then investing that money in cages for children who’ve been ripped from their parents arms by ICE using the jaws-of-life lubricated with baby seal oil?  Yes or no

This entry was posted in Cartoon, Politics, Society and tagged 2043 demographics, polls, PRRI.

The many mouths of Democrats

The tolerant, coexist-bumper-sticker liberals seem to be oblivious to the fact that stoking hate is not trumping hate.  It’s not hard to imagine a liberal beating you with a bull horn in between singing verses of “All You Need is Love” by The Beatles.  Of course, it’d be their own version.

There’s nothing you can do that can’t be fought.
Whatever you propose it must be stopped.
Nothing you can say ’cause we know how to play the game.
It’s queasy.

Nothing you can make that can’t be lost.
No one you can sway that can’t be bought.
No more pro-nouns he or she, no more masculinity.

All you need is love.  (On the left now)

All you need is love

Love is all you need.

Love is all you need.

This entry was posted in Cartoon, Democrat, liberal, Society and tagged Love Trumps Hate, Talking out of both sides of your mouth, The Beatles All You Need Is Love.