Now that Ivanka Trump’s perfume has seen a sales explosion due to, of all things, retail outlets removal of the product from their shelves, Ms Trump has been looking to further incorporate irritated liberals in her business strategy.

Immediately following the election, major retailers decided that it is better for the country and their business if they did not appear to be in any way supportive of the new pro-business president.  Unfortunately, the vast majority of liberal women do not enjoy smelling pleasant, leaving this bold move to go unnoticed by their targeted demographic.

A recent poll indicated that the most popular scent for women who lean left was royal pine air freshener.  “These women are clearly not playing in the women’s fragrance market, hell, they’ve barely cracked the deodorant and razor markets”, said pollster Carlton Treat.

Despite the lack of interest in fragrances beyond what is immediately available from nature, Ms Trump has determined that these liberals can play an important role in production and marketing.  She just announced a new women’s fragrance she’s calling Larmes de Gauche.

Through keen business observations, Ms Trump found a perpetual supply of the key ingredient that will certainly outrage the left and make the sales of Larmes de Gauche the hottest Ivanka Trump product to date … tears of liberals.  “The volume produced is incredible”, says Ms Trump.  “The only downside is collecting the flood of tears without being bitten.”

Public health notice:  All tears collected are painstakingly subjected to intense radiation to kill STD’s and most common forms of microbes and fungus related to poor hygiene. 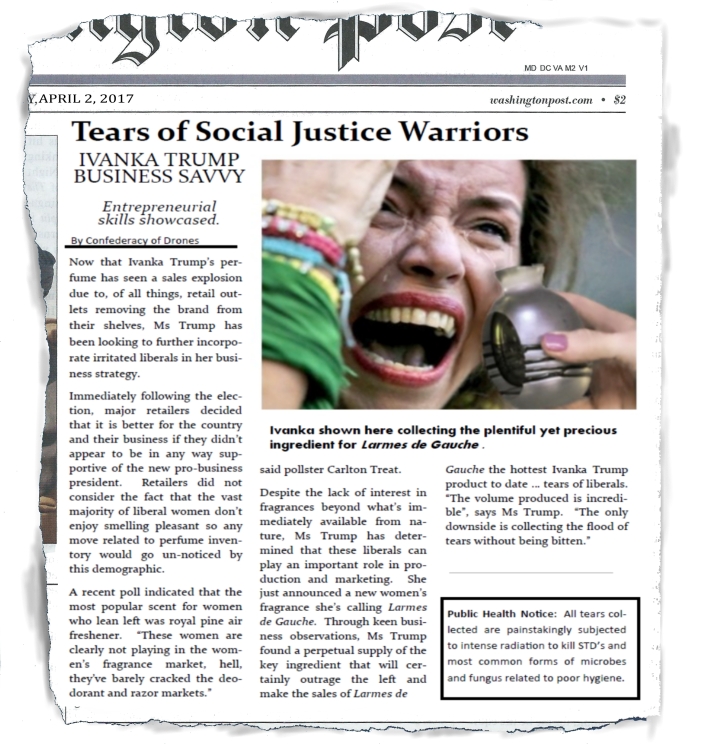 I love all of them. Keep them coming😘