A moment to reflect on the Apollo missions 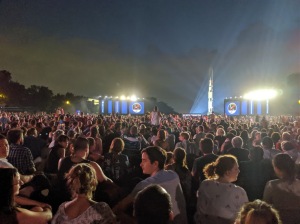 Similar to a piece of dust rolling around behind your eyelid, an incessant hiccup or a toothpick repeatedly jammed into your eardrum, political angst in this country doesn’t seem to leave the back of our mind.  However, the irritating triggers that set our teeth to grinding were an afterthought during the recent 50 year anniversary celebrations of the Apollo 11 mission and it’s giant leap for mankind.

On Washington D.C.’s National Mall, a special tribute to the anniversary included a projection of a life size Saturn 5 rocket onto the Washington Monument, complete with clouds of vapor puffing from the rocket’s liquid  fuel tanks.  Young, old, Democrat, Republican, immigrants, visitors, annoying people who stood up on the lawn so that a friend could find them while perfectly blocking the view of the monument… wwhheeeeeeeewww… deep cleansing breaths.  And we’re back.

Our photos are shown above but you can check out some really impressive pics on-line through local Washington DC news coverage as well as a video of the Saturn 5 launch.

The patriotism, the pride, and the excitement of Apollo’s phenomenal achievement was evident on the face of each and every person on the Mall.  The opportunity allowed some much needed reflection on John F. Kennedy’s rallying cry that carried us through a decade and arguably instills pride to this day, affirming America’s exceptionalism.  A video of his “We choose to go to the moon” speech was even projected.  And for those who consider “American exceptionalism” a misery-causing trigger, we suggest a dark room, no internet, and a blankey.

The rest of us think this country is pretty great.